I love watching dinosaur films. As long as there are pretty dinosaurs, I’m not too picky about the script, acting or anything else. There is one thing I’m a stickler for though: realistic animal behaviour.

I’ve complained before about King Kong‘s handling of dinosaurs, where they go after the humans as snacks above all else (including their personal safety). Even Jurassic Park had issues, as the predatory dinosaurs were a little over-interested in eating people. The velociraptors were intelligent social animals who had been raised by humans… and the audience is supposed to accept that they have no emotional attachment to any human. The same goes for T-rex, who was intelligent enough to figure out how to take out the fence, but went after cars she saw every day, and knew contained her mini-rex friends who regularly brought food. “Because they’re dinosaurs” isn’t a reason*.

The dinosaurs also have a handy tendency to congregate in large mixed-species groups anytime the characters look out over the park.

When I watched The Dinosaur Project, I knew nothing about it, other than it had dinosaurs on the cover. It’s a relatively low budget production, using the self-filmed style made popular by The Blair Witch Project. Given all that, it was a surprise on the animal behaviour front.

The story follows a British team heading to the Congo in search of Mokele Mbembe. They’re assigned a conservationist, whose role is to guide them through the jungle and make sure they don’t damage any wildlife or habitats**. Unsurprisingly from the title, they find more than Mokele Mbembe.

The first species they meet is clearly an eats-people variety***, but does so due to having prior success at hunting humans. Later on, the humans outnumber them and resist, so the animals back off. In the real world, a show of resistance is usually enough to drive off wild predators, at least temporarily. It’s nice to see it happening in a film. If anything in this sequence, it’s one of the humans who does something mind-bogglingly stupid from an animal behaviour perspective, not the predators.

There’s also an example of intelligent predators, who don’t automatically view humans as food. Instead, they’re curious and a little cautious****. They can tell humans apart*****, which becomes important when not all the humans turn out to be nice.

But the thing that really stands out is most of the dinosaurs stay away from the humans. They’re heard in the distance, but most have no reason to get close. I liked that the face-to-face encounters were a limited range of species. These are wild animals who’ve had little contact with humans, and have a previous history of trying to stay away from humans******. This will likely be a point of criticism for the film, as people expect the dinosaurs to pose, but for me, sometimes it’s nice to see a little more realism.

My main complaint is true of most of the lost world genre, in that it sticks a little too closely to the fossil record. Continued evolution is mentioned (which is more than most), but I look forward to the day I pick up a film that has created all-new dinosaurs, with radically different behaviours based on their new environment. Though at the end of the day, it had dinosaurs eating sweets and people, and that’s good enough to cover most issues.

* Consider that plenty of intelligent predators are kept in captivity. Big cats and wolves are common examples. The majority of these animals aren’t aggressive towards their keepers, because they accept these humans as part of the family. It’s the less intelligent predators that cause most issues, as they may not be able to learn that humans are friends, not food. Intelligent dinosaurs are in the same league as mammals, birds and cephalopods, so would be expected to behave more like a tiger and less like a shark.

(Not that sharks are like the film version either. They don’t attack anything that moves and do tend to avoid people. But they’re also not that smart, so don’t expect a great white to have snuggly feelings about you being one of the family.)

** Though not the main topic of the post, I did like this nod to anti-colonialism. Unlike classics in the British explorer genre, their guide is not there to lead them wherever they want to go. She’s there to make sure they get in and out with as little damage caused as possible. I would’ve liked to see more character development time for her, but it has to be said, character development isn’t a strong point of this film as a whole.

*** The first species got my classification ponderings going, because they fly like pterosaurs, but those heads look very dinosaury. My best guess is they may be intended as early pterosaurs (the fossil record isn’t good for early pterosaurs and their ancestors, which leaves it open to interpretation).

**** Though not technically a dinosaur, the handling of terror birds in Prehistoric Park (a fake documentary program where they travel back in time to rescue soon-to-be-extinct animals) hit this one. Because humans were unfamiliar, the terror bird was curious… and after they started feeding it, grew actively friendly. In general, Prehistoric Park‘s handling of animal behaviour beats films hands down, but in fairness, it was written with that in mind.

***** Back to the Jurassic Park raptors, it would’ve come across far more realistically if they’d avoided/ignored most of the humans, and focused in on hunting down the main keeper (as he’s the one they associated as keeping them captive, and who wanted them dead). Telling individuals apart is an important skill for social animals, and does extend to how they view other animals (including humans). Why bother with a human stranger? They’re more trouble than they’re worth.

****** The reason they’re not staying away in the film is a spoiler, but if you’d like to know: ~~ spoiler warning: highlight to read ~~ The conservationist believes they’re being forced into contact with humans due to deforestation. ~~ spoiler end ~~

Featherbrains is the story of two battery hens, Flossie and Bessie. When they escape their cages, they find themselves in the outside world. A friendly jackdaw watches out for them as they explore.

This is a children’s chapter book. The story is light-hearted and there are quirky illustrations by Quentin Blake. At the same time, it introduces the serious issue of animal welfare in farming at a level that a young child can understand. It’s not a favourite and I don’t think I’d seek it out (unless specifically needing a book on battery hens), but it’s also not bad.

I’ve got a poem up at Every Day Poets today! It’s a light-hearted poem, so no sadness warnings this time:

I have a strong urge to post relevant lolcats, but I’m resisting.

Some of the honey bees are swarming in the local woodland. Given the decline of bees, it’s nice to see. It’s also fun watching people fleeing the bees for no reason (it’s not like the bees care about people being there… they’re too busy doing their swarming thing to sting anyone. I was standing right in the middle of the swarm and I wasn’t stung).

They were a little high up. If they come down lower before heading off to their new abode, I’ll try and get some better close-ups.

Unlike my usual photo posts, these are linked… click on them for the bigger version. 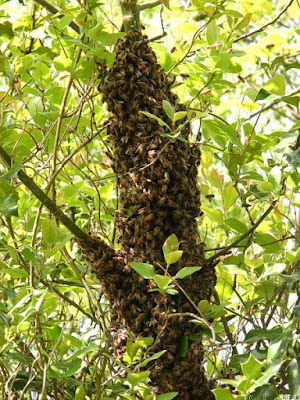 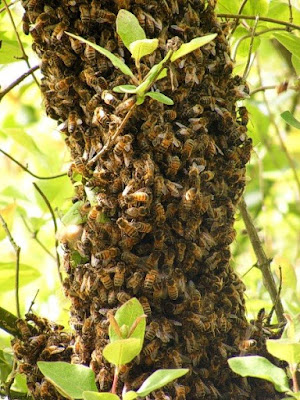 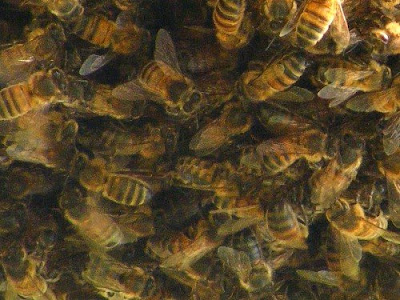