The original version of this game was coded in two days, though the version for sale has other updates. The basic premise of the game is simple. The tiny feesh has to eat smaller feesh to grow in size, whilst avoiding being eaten by bigger feesh. Some have special skills, such as producing child feesh. Some are more aggressive than the rest, such as the sharks that will track down the player feesh.

Arcade mode is the main one I played. After reaching a certain size, the feesh evolves into a different type. My main criticism here is that this doesn’t unlock the new type permanently. I’m never going to be good enough to play through all the different creatures in one game, so it’d be nice if I could start with a later creature. That way, I’d have a chance to eventually play all the available types.

Shark attack mode has extra sharks and doesn’t last very long. I couldn’t do multiplayer as I only have one keyboard/mouse, but it’s a local versus mode. Chillout mode is like a screensaver, where all the feesh do their thing without any player control.

I liked the way the other feesh are doing the same thing as the player feesh. Sometimes one of those feesh will end up growing very large, as they successfully manage to eat loads of tiny feesh. It creates the feel of a working ecosystem, where the player is no more important than any of the other feesh. Eaten feesh respawn elsewhere, so there will always be other feesh around to continue the game.

Image Caption: The player feesh is in the centre. It’s a grey teardrop shape with three white eyes at the rounded end and a hexagon at the pointed end. It has two larger fins and a number of other lines sticking out of it. Several smaller black feesh surround the player fish. Two sharks are approaching from the right.

The art style is fairly minimalistic with a whimsical flair. The main feesh, and some of the others, look like microscopic creatures. Others, like the shark and crayfeesh, are based on larger fish and sea creatures. It’s not scientific, but it clearly isn’t supposed to be. You’re a feesh and the world is very silly. I’d note there are some flashes of light at times, though it’s more of a gradual increase in light rather than a strobe effect.

This is the sort of game for playing a round in odd moments. It doesn’t have a whole lot of depth, but what it does have is nicely done. It’s cute and I enjoyed the feel of the art and the funny descriptions of the feesh. It’ll be interesting to see how the developer tackles larger projects. Hopefully that sense of whimsy will be carried though.

The little black fish is tired of swimming in circles all day, so she decides to leave and find out where the stream ends.

This comic is an adaptation of the children’s book “The Little Black Fish” by Samad Behrangi. There’s a note at the end discussing some of the changes from the original material, though none of them are that major. The main flow of the story is the same as the original text.

I loved the art style in this. It’s very colourful with a lot of detailed patterns. The panel layouts are varied, which helps provide visual interest. The balance of text to art worked to make it clear what was going on.

As to the story itself, its strengths and weaknesses are down to the source material. On the plus side, it’s a tale of how one person’s achievements can inspired others. The frame story is a fish telling her children and grandchildren (I liked the nod to biological accuracy, as there’s a huge number of them) about the black fish’s adventures. It’s a story about striving to achieve your dreams and ask questions, even if others are sure you’re wrong.

It’s also interesting in a political context, as it touches on issues like people being shunned or killed to maintain the status quo, and attempts to suppress knowledge. As someone born to a working class family, feeling like life is swimming in pointless circles, and wanting to escape that, is something I can relate to.

There are aspects I did not like as much, and would make me hesitant to read this to a younger child. Crying is treated harshly. To cry makes you a cry-baby and a disgrace. The old are criticised for whining about things. The black fish is called crazy, and calls others ignorant in response. Though being called crazy is portrayed as a bad thing, it is the black fish who is saying others must not complain about things and are ignorant for not agreeing with her. Those are all things people throw at others to shut them up (stop whining, stop crying, you’re just stupid), which rather goes against the central theme of the black fish wanting the freedom to speak her mind and achieve her dreams. It’s a selective freedom for her, and people who think like her.

It’s also a rather simplified metaphor when it comes to the poor. A lot of people aren’t caught swimming in circles because they don’t believe there’s anything else, but because they can’t escape their circumstances. There isn’t an opening in the stream for them to swim down. Or if there is one, they’re not able to fit through it. This is implied with the lizard, as he offers support for the fish without going himself, but it’s not directly stated.

For an older child or adult, the story can be considered in the context of when and where the original was written. For a younger child, that’s going to be a bit over their heads.

I think this would be a great book for any fans of the original, as well as people new to the story. The comic adaptation does add something extra. But it is very much a story where knowing the context is important, as some of the morals of the tale are a little uncomfortable in a modern context. I’m all for telling people to strive for their dreams and to be inspired by others, but not so much that it’s bad to complain or cry when something’s hurting you.

My new tank now has a resident. Shimmer is a female fighter fish, and is probably between six months and one year old. She’s white, with iridescent blue highlights on the fins and tail. As it’s her first day, I didn’t hassle too much with photographs. The best I got was this one:

I also took a few videos, which I’ll likely put together later in a setting-up-a-tank video series. But here are a few still shots from them. The last shows how blue her tail can look as she moves:

She’s generally settling in well. She’s clamping her fins a bit (not so much in the shots, but other times), which is usual after a scary day moving to a new tank. She’s really enjoying picking off little critters from the driftwood and plants, so I can recommend spending a little extra time on setting up a proper soil-based planted tank. It’s not that my previous fighter tanks were bad, but this one is much more awesome for the fish.

In about a month, I’ll introduce amano shrimp. The place I get my fish keeps the fighters in with other fish, so I’ve had a chance to see how she deals with tankmates. She had some very tiny fish in with her and was ignoring them, which is a good sign for being a tankmate-friendly fighter.

FISH by Dagan Books, an anthology of speculative fish stories, is out in the world. I wrote a little before about my story, as it was one I had trouble placing. There’s also a page on Dagan Book’s site all about fish, with a full table of contents and information about purchasing.

Thwarting the Fiends is about a boy called Broccoli, and his slightly surreal adventures in his back garden. The world he travels through is based on his make-believe play.

The inspiration was my own experiences of ancestry issues. I don’t look Northern European, and that raises questions, but I can’t answer them. I don’t know my ancestry. Nor is there any culture remaining from whatever cultures were involved. There’s a generally feeling that something was lost, though I don’t know what, and that I’ll never quite fit. There are always more questions saying I don’t belong where I am.

In Broccoli’s case, he has more awareness. Not in the direct sense, but he knows enough about his family’s cultures to imagine a world where they interact. Not in a tidy and obvious way, because fragments don’t go together neatly, but it’s there.

I wasn’t sure if anyone would see any of that, or if they’d see it an disapprove of how I’d tackled it, but either way, that’s how the story came about. And it has goldfish. Lots and lots of goldfish. So if nothing else, read it for the fish. 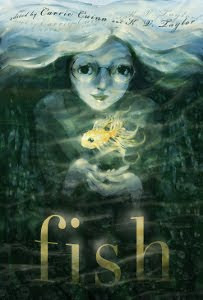