This is a small section of my art coursework, reviewing my visit to the Choucair exhibition at the Tate Modern. The overall coursework topic is “The Human Condition”, which is why the focus of the review is relating it to people. I figured it might be of interest to some of my blog readers.

Saloua Raouda Choucair (born 1916) is a Lebanese artist, known for her abstract art. I visited an exhibition at the Tate Modern, which covered her work throughout her career.

The first room displayed her earlier work, including pictures she’d produced whilst studying in France. Les Peintres Célèbres 1 has clear inspirations from Fernand Léger’s work (she studied at his studio), though the tone of the piece is different. Cubism and related styles are often violent to the subject, pulling them apart and reconstructing them. There is an overtone of hostility to the subjects. In contrast, Choucair’s women are organic and the scene is restful. That feel of domestic comfort acts as a critique of the work that inspired it.

Stepping away from her early work, her skill as an abstract artist is clear. Pieces such as Fractional Module show geometric shapes in bold colours, repeating and overlapping. There’s an influence from Islamic design, both in the patterns and the technique of starting with abstraction (rather than building up to it with figurative works first, as is commonly taught in Western art). Mathematical theory and poetry are common themes, giving the pieces a rhythmic tone. It’s a different approach to showing human experience than other artists I’ve looked at*, as she deals with the abstract aspects directly, rather than using the body as a focus.

Her wooden sculptures particularly interested me. Some are towers made of multiple pieces, but it wasn’t clear at first glance whether this was the case or how many pieces had been used. By forming the wood into complex interlocking shapes, each tower forms a new combined shape.

The later sculptures move away from the colour of traditional Islamic art, with the use of wire, metal and other plain surfaces. The wire structures still have a repetition of line and curve, but it’s coupled with a focus on tension and energy.

The exhibition as a whole was well presented, with a good balance of sculptures, paintings and descriptions placing them in context. I find exhibits that are too heavy in one sort of work harder to get around, as all the work requires the same kind of attention. (This is something I’ll keep in mind when it comes to presentation of my own work.)

Choucair’s exhibit was popular enough to be extended for a few more weeks, which is very rare at the Tate Modern. Yet her work** has rarely been shown outside of the Middle East. It’s a reminder of how slanted art history has been, where the contributions of European artists are celebrated, whilst the work of others is often dismissed and forgotten. Hopefully this exhibition will help ensure Choucair is remembered.

* The ‘other artists I’ve looked at’ refers to the ones in my coursework, rather than all artists I’ve ever seen.

** Her page at the Tate’s website has the pieces they own: http://www.tate.org.uk/art/artists/saloua-raouda-choucair-14735

The Tate Modern has a section about the exhibition I visited, with photographs and details of the work: http://www.tate.org.uk/whats-on/tate-modern/exhibition/saloua-raouda-choucair

# The picture is one of the wooden towers. It’s copyright to the Saloua Raouda Choucair Foundation, and is used for the purposes of review.

I went to the Tate Modern for the first time a little while back. I had a mild fever by the time I got home, so I took aspirin, laid down for a bit, then got up and write a story about artists and tentacle monsters*.

The fever wasn’t because I was sick. It was sensory overload. When I walk into a crowded room, it’s like I’ve walked into trippy dayglow land. My reactions range from general distraction, to seeing lights and shapes in front of my eyes. I used to think this happened to everyone, but I came to realise that for most people, a busy room is a plain and stationary affair.

Sensory overloads aren’t always bad. Art is something that sets it off in a good way. I may well see spots and have fever symptoms, but I enjoy visiting galleries. I’m attracted to bright colours, bold shapes and light rooms (where the room in dark, apart from points of light). Modern art has plenty of those.

This time when I visited the Tate Modern, I looked over the paid exhibitions**. I was immediately drawn to Yayoi Kusama’s work, as it it was bright and covered in polkadots. Finding out she had hallucinations***, which led to some of the repeated images, made me even more intrigued. I don’t think she sees things for the same reason as I do (there’s no discussion of sensory overloads in the interviews), and I’ve never felt the things I see were real (they’re translucent, like an overlay on reality), but I was curious to see how it influenced her art.

The art is mostly laid out in chronological order. Her early paintings are smaller abstract works, with a focus on colour and patterns. Once she’d moved from Japan to America, the canvas size gets bigger. One room is taken up with ‘infinity nets’ – repeated white circles on large canvases. These wouldn’t translate well as prints, but full-sized on every wall of a room, they have a calming effect. It reminded me of being on the beach on a calm day, as the infinity nets had a similar sensory impact to waves.

She also moved onto sculpture, being known for covering everyday things with items that caused her anxiety. The ones people focus on represent her anxieties about sex, but I noticed the clothing covered in flowers. Sex is not an uncommon anxiety. The objects with pasta on aren’t a surprise from someone risking starvation in a country with plenty. But flowers struck me as a more unusual thing to be anxious about. Some of her interviews mention seeing fields of flowers as an example of an infinite thing – that the flowers go on forever. For me, the fear/wonder that comes with imagining the true scale of things made for a more interesting sculpture. But I guess for most, sex sells more than infinity flowers.

Her later pictures included collages, which have a melancholy feel to them. This shifts slowly into her most recent work – bold acrylic paintings with a cheerful feel (something I’ve seen criticised… but I don’t view happy emotions as less artistically worthy than sad ones).

The highlight of the display were the two room installations (both of which I’d call light rooms). “I’m Here, but Nothing” is a dark room, set up like a room in a house. Fluorescent spots cover everything, lit by a UV lamp. Though you can see the items in the room with the faint light, the glowing spots dominate. From my perspective, it was like an inversion of sensory overloads, where the spots are no longer the overlay. They’re the reality, and the room is the unreal layer.

The second light room was “Infinity Mirrored Room – Filled with the Brilliance of Life”. It’s covered in mirrors, with multi-coloured lights hanging down. The lights shift through various colours, creating an endless expanse of lights in the mirrors. Almost like a starscape.

Armed with a copy of Alice in Wonderland (illustrated by Yayoi Kusama), I headed home. The family member who came along got a collection of postcard prints (we did the shop before heading in, so also played the game of spot the original in the exhibition). The gnarly mutant polkadot pumpkin cushions were out of my price range, but fun, as only gnarly mutant polkadot pumpkins can be.

It sounds strange to say, but I hadn’t considered why I tend to put spots all over things. My spots are much smaller and not of the polkadot variety – often they’re smallest dot I can make with whatever media I’m using. But they’re there. I suppose because I’ve always been aware that the spots aren’t really there, I didn’t consider why I was making them real in my pictures.

* This story was “Visions of Destruction Series, Mixed Media”. On the first visit, there were a lot of art series on display.

** The Tate Modern itself is free, but the special exhibitions need paid tickets. I recommend booking in advance. The ticket collection queue had about ten people. The ticket purchase queue went all the way to the main door and back again. I was glad we’d booked.

*** One criticism is that Kusama apparently didn’t discuss having hallucinations with friends when she was younger. Some take this to mean she didn’t really have them. But not only is it difficult to discuss seeing things that aren’t there (people don’t exactly take the news well most of the time), it’s not immediately obvious that it isn’t something everyone experiences. We tend to assume we experience the world the same way as everyone else, until proven otherwise. Saying, “Well, of course it’s obvious people don’t see spots, because I don’t,” is proving the point.

# The Tate asks for people not to take photographs in the ticketed exhibits, and to only use photos taken in the other galleries for personal use. I’m honouring that request… however, I have included two pictures taken outside the main galleries. The polkadot beach balls were dangling down outside the Yayoi Kusama display and the colourful perspex is the donation thingy at the main entrance. Pictures from the exhibition itself can be found on the BBC website and more information about Yayoi Kusama is on her website.

The street artist Banksy was recently in my local area* – he left a picture of a child making Tesco sandcastles**. Needless to say, I went down to get some photographs. The local council stopped it from being removed by the anti-graffiti team and covered it in a clear protective screen. Other graffiti appeared around it, including some from the feud between Bansky and King Robbo.

The Tesco in St. Leonards is really big. Not compared to space, but compared to supermarket sizes. The store is some ways inland from the coast. 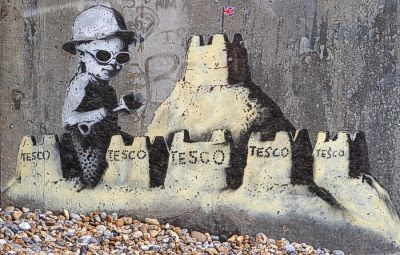 Detail of the child 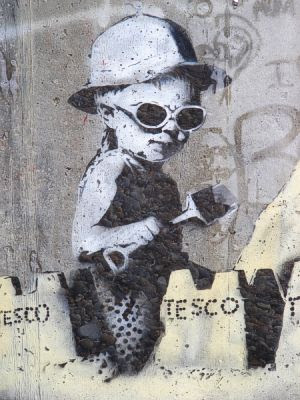 The Banksy with the beach in the background 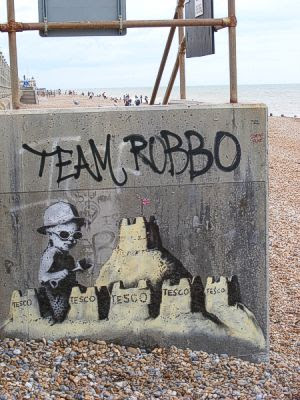 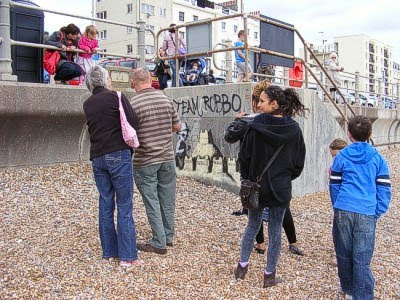 * The location is St. Leonards-on-Sea, East Sussex, England. If you’re in the area, here’s how you get there: starting at the Hastings / London Road side of St. Leonards, walk down the seafront past the Marina (the large building shaped like a boat).

The Banksy is on the side of one of the steps leading to the beach. It faces away from the direction you’re walking.

** Banksy has confirmed it’s one of his.